When the Ottoman Empire began recruiting young men to fight in World War I, my grandfather, along with thousands of other Syrian and Lebanese Arabs, packed up and left for South America.  After 15 years of peddling fabric across Argentina and Brazil, he moved back to Damascus and started his textile business, which stands in the Old City to this day.

I never met my grandfather, but coming to Buenos Aires had long been a dream of mine, if only to find traces of what my grandfather could have seen. My journey to find the Arab quarter in Buenos Aires began in Plaza Armenia, because, well—Armenians are close enough, and I thought it made a good clue.  Sure enough, there were a couple of blocks along Avendia Raúl Scalabrini Ortiz scattered with Armenian and Arab restaurants and imports shops, as well as a big Armenian cultural center and Orthodox church. After asking around, however, I discovered that there were but a few traces of the Arab community left.  I was a bit disappointed, to be honest, until I ran across this man, who I’m convinced is the reincarnation of my grandfather.

I stepped into an Arab decoration store and speak to the owner for a few minutes an hour. Abdelkader is a 35-year old man from Homs who moved to Buenos Aires five years ago because of the war. I wish I had some feel-good story to tell you, but I don’t. He hates it here.

Other than that, however, I didn’t find out much. I went to the mosque to conduct some research, but the security guard was very unhelpful. I did pray for the first time in a looooong time, however, because they wouldn’t let me enter the mosque unless I said I was going into pray. I ate a sausage sandwich (choripan) right after. It cancels out, right?

A couple of Arab-Argentine anecdotes:

And that concludes my informal, non-journalistic research of Arabs in Argentina. I also did some other typical touristy Buenos Aires things, which you can find below with limited commentary.

Took in the colors of La Boca:

Hung out with the punks, vandals, skaters and tattooed hooligans at Bond Street: 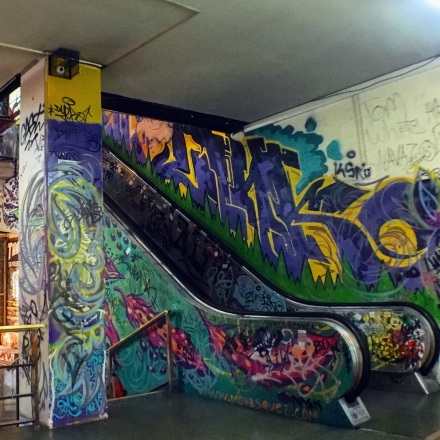 At night, I played ping pong and drank beer in Cafe San Bernardo in Palermo, because my host D is an amateur ping-pong player (and his best friends is a professional). I couldn’t keep up at all. It was an awesome old man bar though.

Port: Puerto Madero. This is where to get ferries to/from Montevideo.

Central Bus Station: Retiro. This is where to catch buses to other parts of the country.

Recommended listen: There are so many good bands that came out of Argentina in the 80s and 90s, it’s hard to pick just one song. If you haven’t, listen to Soda Stereo, as they’re they OGs of Latin American rock. But my recommendation is this:”Loca tu forma de ser” by Los Auténticos Decadentes.